Study is integral to WANOSCG, it being part of our name. Presentations at meetings by study groups and the occasional workshop are aimed at sharing information and learning about various aspects of WA orchids.
Information from the Adopt an Orchid Project (ADORP) study group is passed on to the Department of Biodiversity, Conservation and Attractions, where it is added to the Department’s Threatened and Priority Flora Database (TPFL). Information from the other study groups helps improve the knowledge of our native orchids and their ecology.
All members are welcome to join the current Study Groups or contact the group coordinators to share information.
Some members may be interested in forming other Study Groups, so communicate ideas via the Bulletin, Facebook site or at Meetings.
NB: Department of Parks and Wildlife became part of the new Department of Biodiversity, Conservation and Attractions in July 2017.

ADORP (Adopt an Orchid Project)
This is a collaborative project between WANOSCG and Department of Biodiversity, Conservation and Attractions where WANOSCG members adopt an orchid species or group of orchid species that they monitor and survey in order to obtain better and up-to-date population, threat and survey information. The project covers Priority 1 to Priority 3 species, that is, those species with very little documented population information or are possibly most at risk.
Contact: Kevin Uhe, ADORP Coordinator
Mobile: 0419 913 792 Email: kuhe98694@gmail.com

Burns Study Group
This group studies and records the effects of burns, both bush fires and Department of Biodiversity, Conservation and Attractions prescribed burns, on orchids. Spring, summer and autumn burns are monitored and recorded, and the ones in interesting areas are chosen to study throughout the following year. Comparisons between the effects of early and late season burns may influence Parks and Wildlife’s prescribed burning programme.
Orchids in burns flower from April to December.
Many orchid species only flower after a hot, summer fire and many others flower more profusely following a suitable fire. The orchid data from multiple visits to the chosen burns is recorded and put into the WANOSCG database, and is forwarded on to Department of Biodiversity, Conservation and Attractions when appropriate.
Contact: Kevin Uhe, ADORP Coordinator
Mobile: 0419 913 792 Email: kuhe98694@gmail.com

Snail Orchid Study Group
This group is looking for and studying the many different snail orchids throughout the state. In particular, it is studying closely related ones to determine similarities and differences between them. It is putting data into the WANOSCG database to record sighting locations, extensions of range and information on un-named species.
Snail orchids flower from May to November.
A very successful Snail Orchid Field Trip was run in August 2015 when 21 species of named/known snail orchids were found and a few un-named ones. WANOSCG produced a book to record the trip and orchids found.
Contact: Kevin Uhe, Co-ordinator
Mobile: 0419 913 792; Email: kuhe98694@gmail.com

Winter Spider (Caladenia drummondii) Study Group
This study group was formed in 2016 during a trip to the Kondinin area looking for the early flowering Winter Spider. It aims to increase the recorded locations in the WANOSCG database for this species, which has been found between Lake King and Nerren Nerren, north of Kalbarri.
This orchid flowers mostly from early May to June.
It can be found in a variety of habitats, from open mallee woodland to melaleuca shrubland and grows in both clay and loam soils.
Data such as date and number of flowers, leaves and seedpods is recorded for each location so that comparative studies can be done from year to year. Locations of old records are also checked to see if the orchid is still present.

A field trip is usually run over the long weekend in early June to different areas of the wheatbelt:  north, east and/or south of Perth looking for new locations for this orchid. 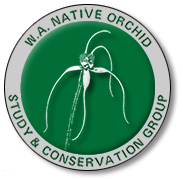